E.T The Legend and the Facts

In 1982 Atari enlisted the talents of Howard Scott Warshaw to developed a game based on the film E.T the Extra-Terrestrial for the VCS 2600. The object of the game was to guide the alien through various screens and collect pieces of an interplanetary telephone, which eventually allows E.T to phone home.

Due to the popularity of the film, Atari anticipated the game to sell well. However when Atari finally secured the rights the produce the game, it had left Warshaw only five and a half weeks to develop the game in time for Christmas. The result was a commercial flop. Anticipated high sales, Atari produced 5 million copies of the game but only sold 3.5 million. A combination of returns and low sales would lead to the company netting a loss of $100 million., this would prove the beginning of the end for the once mighty video game giant. 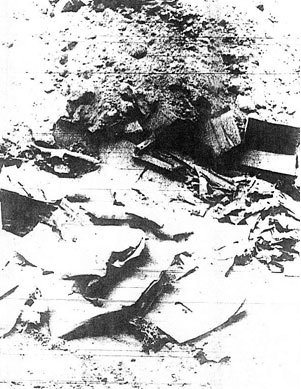 Original photo of the site taken in 1983

E.T is regarded by most gamers as one of the worst games ever released. The failure of the game and the effects it had on Atari have led some to suggest it contributed to the games industry crash of 1983.

In the years that followed, an urban myth developed around the fate that befell millions of unsold copies of the game as well as the thousands of copies that were returned. In 1983, a Mexican news paper based in Alamogordo, Mexico, reported a large number of trucks arriving in the city from an Atari storehouse in El Paso, Texas. The report went on to say, that the trucks had unloaded several trailers full of Atari games, consoles and peripherals to a landfill within the city, where they were crushed and subsequently buried.

Many dismissed the story as untrue, including E.T’s original developer Warshaw, who had the following to say on the subject:

“I’ve seen lots of evidence by hearsay and print but I’ve never really heard from any first hand participants and no one has ever produced a single cartridge from the burial site in over a quarter century.”

However for some gamers, Atari’s denial as well as that of some of it’s employees only fueled the spell of mystery around the fabled Atari treasure, which lay buried somewhere in Mexico awaiting discovery.

Since 1983 the E.T story has been told time and again, ironically making the worlds worst game in to one of the most talked about and known. Youtube is rife with video reviews of the game, the channel G4 even featured the it in an episode of “Code Monkeys”, in which the two main characters, Dave and Jerry are tasked with developing a game based on the movie E.T. True to reality the game they develop is terrible, resulting in an angry mob of gamers hunting for the developers responsible.

Digging up the truth

In 2013 the city council of Alamogordo granted permission to Canadian media company “Fuel Industries”, to search for the cache of unsold Atari games and other products which had been buried on the site over 30 years ago. The company organised the search in conjunction with Xbox Entertainment Studios, who plan on featuring the excavation in an exclusive documentary for Xbox One and Xbox 360, called “Atari: Game Over”.

On the 26th of April, 2014, the team of excavators armed with a JCB and bulldozers fell upon the landfill in Alamogordo. Extensive efforts had been taken by site organiser, Joe Lewandowski, to locate the site, once a local garbage contractor in Alamogordo. Interviewing truck drivers, landfill owners and local residents and listening to the stories of those who had witnessed the original 1983 dump as kids, and how they sneaked on to the site at night, coming away with handfuls of Atari cartridges. While the pressure was on during the dig, within hours of commencing the team had uncovered boxed copies of E.T, along with other games such as Defender, Centipede, Breakout and ironically Raiders of the Lost Ark. Hindered by strong winds and dust clouds, the team were only able to uncover a small fraction of the estimated 750,000 games buried on the site by James Heller, an Atari employee in 1983, who was tasked with the job of disposing of a warehouse of Atari products as quickly and cheaply as possible.
Present during the excavation were Howard Scott Warshaw original developer of Yars Revenge and the less successful E.T. As well as Joe Lewandowski screen writer and film director Zak Penn.

So there you have it folks, the mythical Atari burial site has been found, be mindful of anyone offering you a new boxed copy of E.T, as it may contain sand!