Produced by Pimoroni, a British company based in Sheffield, the Picade is an all singing and dancing tabletop arcade cabinet that can be put together in an afternoon. For £180 you get everything needed to build your own working cabinet (minus the Raspberry Pi) such as:

The kit is primarily geared towards users of the Raspberry Pi, but that doesn’t mean you couldn’t use it with a mini ITX board or Odroid. In fact the rear door on which you mount the logic board has markings for several different models of computer not just the Pi. Anticipating the needs of their customers, Pimoroni have designed the kit with the hacking and modding community in mind, something they do with a lot of their products. 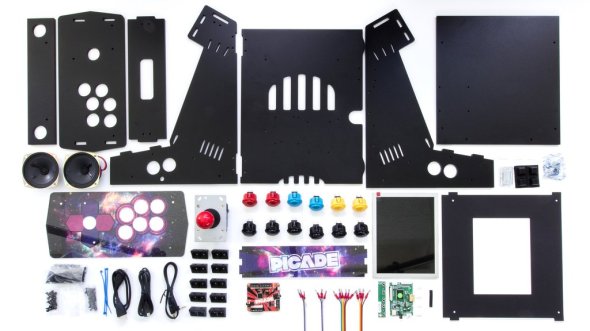 Everything you need to make your own arcade

In 2012 when Pimoroni began their Kickstarter for the Picade I had an opportunity to try a working unit, needless to say the experience was enough to leave me wanting one. It wasn’t until the early last year when I finally got one of their kits but sadly didn’t have any time to assemble it. So the kit sat waiting on my to do list till October came around, when finally my partner and I put it together over several evenings. Assembling the Picade is pretty straight forward so long as you follow the PDF guide provided on Pimoroni’s website. There is also a video guide but in my opinion it is in need of updating, as it led us astray more than once. In the end we resorted to consulting the PDF exclusively, my partner reading the instructions as I placed the pieces together. Contrary to what the video tutorial suggests, make sure to tighten all the screws and nuts using a screw driver, otherwise your cabinet will soon begin to wobble and come apart as mine did after a few plays of DigDug.

The black power coated finish of Picade really sets it off with an old arcade feel, the buttons and joystick are of good quality and fairly responsive to use. At some point I will likely swap them out for more 80s recessed style buttons, but for now they get the job done and look fine.

The Picade comes bundled with an 8” flat panel LCD screen. Originally the kit was available with a 12” panel but I understand supplies dried up and Pimoroni have been unable to source any more at a reasonable price. At first when I removed the panel from its packaging I thought it was mighty small and had some misgivings about its effectiveness for playing games on, but honesty I hadn’t need for concern. The 8” panel compliments the cabinet really well and once your in playing Pacman or Pole Position you really don’t notice it. The picture is clear, sharp and the colours a vibrant, my only regret is the absence of any scanlines, but that’s more a personal preference and something I can probably fix within the Retro Pie software.

With the cabinet built, it is just a case of flashing an SD card with the relevant Retro Pie image, which you can download via their website @ https://retropie.org.uk. Setup is relatively painless and straight forward and should see you up and running in no time at all. Something I did discovered on my first outing, is that RetroPie has more than one Mame emulator to choose from and some ROMs work better in one than they do the other. If you find like I did that a great many of

your ROMs aren’t working, you may wish to try using the other Mame emulator. The reason this happens is down to the chipsets the Mame is running, different revisions can sometimes expect different files to be present within the ROM archive. Newer revisions tend to be more compatible but unfortunately the one available on Raspbian isn’t, which is why RetroPie comes with more then one Mame emulator. Swapping between the different versions can be as simple as copying your ROMsets to the appropriate folder on your SD card. It is also possible to change it from within Retropie, just after selecting your ROM the option appear on screen to change the default settings, this also includes which version of Mame is used to run the selected ROMset.

When put together, the Picade and Retro Pie compliment one another well and one can hardly imagine one without the other, both are polished and easily accessible products.

When I began to assemble the Picade, I knew from the get go that I wanted to design some custom cabinet art for it – something that harkened back to the days of my childhood with crazy neon colours and funky 8 bit sprites. One thing about the Picade is that the only decals that come with it are for the marque and the control panel, the sides of the cabinet are left alone. As pretty as the powder coating is, I couldn’t help feel there was something better to do with them, such as cover them up with something bright and retro! So I went about designing the art on my recently aqcuired 15” Powerbook G4. Anyone who says PPC has had its day can go suck a lemon as far as I’m concerned, as this laptop not only oozes style but clocking in at 1.55Ghz it runs Photoshop without breaking a sweat.

As you can probably see in the photos from an early stage there was a very distinct 80s theme going on. One thing I had to keep in mind was to make sure the decal art lined up with the side panels on the cabinet, as I wasn’t just contending with the outside edge of each panel but also the various screw holes and speaker grills that the decals would be covering.

The side art is protected by 1mm thick sheet of clear acrylic that has been cut out to the same shape and size of both MDF side panels. Eventually I plan on making the marquee backlit so that the Picade logo and colours are more vivid to the eye.

In my continuing mission to fiddling with my QL and Spectrum, I was hoping to write an article pitting the two systems against one another. All of that seemed to been scuppered when it appeared that getting Tasword on my +2 would be a painful ordeal. While I do own the software on tape, getting any sample documents off on to the PC would have been a challenge to say the least. Fortunately my friend Zetr0 came to the rescue and with some programming wizardy, I now have a fulling working version of Tasword on my internal compact flash drive. So expect to see an article explaining all real soon!

Over the weekend I attended the Retro Games Fair in Leeds, if you havent been I highly recommend a visit. While a little packed there are some fantastic bargains and the atmosphere is warm and cheerful. I came away with a selection of games, including Knightmare and Dragons Lair for the Speccy.

For more info check out the following link

Hello dear reader! Did you miss us?

BMV is back for another year and I have a lot of fun articles I’d like to cover and maybe we can fit in a few interviews this year from people active in the community. I’m sorry the blog has been a bit quiet but I was away busily tinkering, working on my Atari Lynx video conversion, making an AmigaPi 1200 and several more USB tank mice for friends who wouldn’t stop pestering me for one after seeing the one I’d built I’ve also been playing with a Powerbook 180 and discovering the pitfalls of LCD tunnelling which the entire 100 series seems to suffer from.

Blasting away from 2016 is my Picade build which I finished just before Christmas, now in 2017 I put the finishing touches to the cabinet with some retro electric 80s art. Keep your eyes peeled as I’ll be offering up free cabinet decal art for anyone looking to deck out their Picade in proper 80s style!