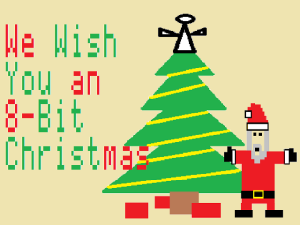 Its that time of year again, when the tree comes out of the attic, lights go up and the sound of “Mistletoe and Wine” blares from supermarket speakers throughout the land.

So during the festive season, what is there for a geek to do? Well how about an 8 bit slice of Christmas music? Tired of listening to the same old songs? Well thanks to Rush Coil, you can enjoy all those festive classics in full 8 bit glory

If thats not your sort of thing, then how about a NES cartridge jam packed with festive fun? Better still it’s designed to work on your original NES.

There also “A Christmas Story” by 8 bit Cinema

If doesn’t tantalize you, then how about a good book?

“It’s 1980-something and all nine-year-old Jake Doyle wants for Christmas is
a Nintendo Entertainment System. No Jose Canseco rookie card, no GI Joe
hovercraft, no Teddy friggin’ Ruxpin-just Nintendo. But when a hyperactive
Shih Tzu is accidentally crushed to death by a forty-two-inch television set
and every parent in town blames Nintendo, it’s up to Jake to take matters
into his own hands. The result is a Christmas quest of Super Mario Bros.
proportions, filled with flaming wreaths, speeding minivans, lost retainers,
fake Santas, hot teachers, snotty sisters, “Super Bowl Shuffles” and one
very naked Cabbage Patch Kid. Told from a nostalgic adult perspective, 8-Bit
Christmas is a hilarious and heartfelt look back at the kid pop culture of
the 1980s.”

Hopefully some of that will have satisfied your festive 8 bit needs. Before the Christmas season began, I found myself repairing a pair of Spectrum+ computers. One was missing an ear phone socket and the other turned out to have a none functioning keyboard. The one with the faulty socket was going to need a lot of work as the display was also turned out to be slightly out of  wack. Fortunately the keyboard on this micro was fully working, so I choose the simplest option and swapped the keyboards. Result? One working  Spectrum+ and one not so working Spectrum+ 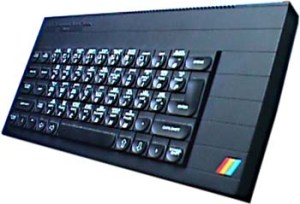 Introduced in October 1984, the Plus was meant give a face lift to the  original Spectrum. Replacing the original rubber keyboard with a more practical plastic design, which it inherited from Sinclairs business computer  the “Sinclair QL”. The original Speccy had a revolutionary design at time of it’s release, but two years later, micro’s such as the Commodore 64 were beginning to make it looks clumsy and out of date. Besides competition from other computer manufacturers, Sinclair also faced a huge number of  companies selling custom cases for the ZX Spectrum. Intented to provide the original rubber Spectrum with a fully functioning plastic keyboard. As a bid to compete with these third party cases, Sinclair offered it’s own. Designed to house the original 1982 ZX Spectrum, the case upgraded any original Speccy in to a Spectrum+.

Ultimately the upgrade to the original ZX Spectrum was hit and miss, one of the main problems being with users complaining about keys falling out.