Well LAG 33 was a resounding success, I attended with my trust A3000. The beige box was finally behaving itself on this occasion. With the only real issue being the darn keyboard. Honestly there seems to be running theme with my recent computer
activities, if it is not the keyboard on the Plus, it is the Amiga giving me gripe. Luckily a quickstrip down and cleaning with alcohol wipes and a toothbrush fixed the issue. Unlike the classic Macintosh Keyboard, Commodore took an easier approach using springs instead of Apple’s self sealed key switches, which made my life easier.

(First of all do not attempt
this while your keyboard is connected to the
computer) The A3000 keyboard
comprises of two halves within the outer casing. First you have the
black top portion, containing the keys, below this is the main
keyboard PCB. The two parts are held together by a dozen or so tiny
screw and one large one. Once these are removed the top half should
lift off, be mindful when taking apart the keyboard as the caps
lock LED fell out on to the floor when i took mine apart. Once you
have the black upper half removed, take a close look at the
circ 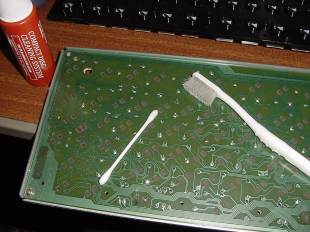 uit board below. The
chances are it looks very grubby with dust build up, so if you have
a spare toothbrush and some lens cleaner solution, give the PCB a
light scrubbing down. Also gently clean the silicon / rubber feet
that are under each key on your keyboard. If they are dirty, this
well prevent the keys from making proper contact with the PCB and
cause your keyboard to work sporadically.

Once you are
done cleaning, remember to fit the LED back in place, along with
the silicon collar. Make sure you have cleaned this too, as it
passes current from the PCB to the LED. With the two halves
together, carefully flip the keyboard over and screw it back
together. Hopefully when you hook it back up your keyboard should
be working. If you still find it is acting up, give it another
clean. I had to dismantle mine twice, the second time to clean the
silicon parts more thoroughly. 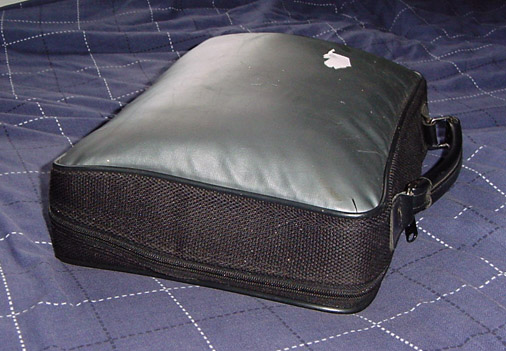 What could be
inside?

If you are sat scratching your head
and wondering who the heck is Viglen, you are most certainly not in
the minority. When my friend Gaz handed me this little beastie at
the last LAG. I was left dumb founded at the brand and that was
even after a quick glance on Google. Which usually comes up with at
least a few bread crumbs to follow. Wikipedia says that Viglen Ltd
was first formed in 1975 by Vigen Boyadjian and later acquired by
none other then Amstrad in 1994. In the 80’s the company apparently
dealt mostly in the Acorn computer market, after Amstrad’s buy out,
the company began to focus mainly on the education and public
sector. Developing desktop and server systems.

This takes me
back

The Viglen Dossier 486 laptop has even less written
about it, the model I have is the 486 -SK4. A quick glance of the
bios tells me i have roughly 4mb ram and 120mb of internal storage.
Whats betting it is an old Western Digital or Seagate drive in
there? Originally this machine appears to have been used in the
design and production of printed circuit boards as I found several
apps for designing boards, not to mention the laptop originally
booted in to some custom designing software. Lucky for me the
previous owners had installed Windows 3.11 as well as DOS 6.22.
Eventually I intend to use this machine to test my Xircom parallel
ethernet adaptor. I bought the adaptor a little while ago to use on
the Sharp PC7200, but as that system takes up a lot of room. The
Viglen will be a fantastic DOS platform to test the hardware out
on. Internet via DOS anyone?? Well at the very least email!

Until I can find my USB
floppy drive I’m unable to test the laptop as much as I would
usually like to. So expect a follow up article about this obscure
laptop and also the whopping battery that sits beneath the
keyboard! As expected the cells are long dead and a replacement
will probably cost a small fortune. Instead I’m going to hack
something together, which will be an article all to it’s own.