Last night I hooked the Atari up and it became apparent that using the console on my new 27″ IPS television is not going to be a match made in heaven. In fact the picture was terrible, even for RF input.

So in the next blog i hope to cover a blog, converting an Atari 2600 lite PAL unit for composite output.

Watch this space and keep on geeking.

Some time ago Virgin media began upgrading customers with their new combo router/modem “Superhub”, a re-badged Netgear CG3101D. Unlike previous models, this was the first model with router abilities. In the past customers had to buy their own routers to hook it up to the cable modem provided by Virgin Media. The CG3101D tries to save you the trouble and to some extent it succeeds, if not a little clumsily. Sadly Netgear has been lobotomised by Virgin Media, in an effort to clamp down on the amount of customers screwing with their internet connection settings. By dumbing down the built in firmware, they hope to minimise the damage as well as the time it takes to get you back online.

Now this sounds like a great idea, but the fact is the Superhub is anything but that. I’ve read one person compare it to the freebies found in boxes of cereal and they aren’t wrong. The firmware is simplistic and oppressively restrictive to any one who is remotely tech savvy.

In most cases the firmware can be avoided by switching the Superhub in to modem only mode, thus disabling the router half of the device, leaving it up to you to pick your own router to get the job done of networking your machines. Now if you do not have the luxury of doing this, the Superhub can get the job done if you can persevere with the firmware. After the last rites where given to my Linksys, I found myself doing just that. Setting up your internet on the Superhub is as easy as it gets, but configuring the device to work how YOU want is another thing. One major issue I hit was setting the Superhub to the same IP address as the old Linksys, my whole network was after all configured for 192.168.1.1. When you try to set the hub to this address it comes back and tells you the address is reserved and there is no apparent way of setting the secondary address to anything else. So how to get round this? Well if your router is running firmware V2.38.01 like mine, then you can do the following:

Set your IP to 192.168.11.1 and let the Superhub reset, once it has cycled you might need to disconnect your Ethernet cable. Leave it several minutes and reconnect the cable, this will re-establish your network connection to the router with a new IP address from the router. You could also use the IP config DOS command, but I leave the choice to you.

Log back in to the router and go back to the section where you altered the IP address, change the address so it reads 192.168.1.1. This time the router should not error as the secondary IP address has been changed sufficiently to free up the IP we want. Click apply and the router will cycle again, but this time it will reboot with the correct IP address. You will need to disconnect the cable a final time and finally the router will be working on the right address. 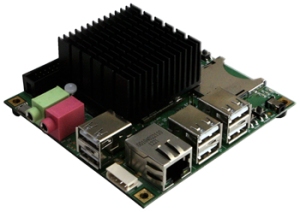 Not so long ago during a visit to Pimoroni, I was asked if I would like to test and review the ODROID X2 mother board; a Samsung powered quad core Arm A9 1.7Ghz micro board with 2Gb of ram, 6x USB 2.0 ports and 1xRJ-45 port.
Measuring in at only 90mmx94mm, the board is not much larger then the Raspberry Pi but to compare the two would be unfair. The ODROID costs £88 or 165,000 Korean Won compared to the RPi at less then half that. The RPi is an affordable, cheap computer platform, suitable for a whole host of low cost projects, but a desktop replacement it is not. The ODROID X2 would seem better suited as a micro PC or an in-car computer. Its quad core CPU has enough grunt to handle applications that would leave the RPi having a mental break down.
Last year I tried running a Mame emulator on my RPi with the hope of turning it in to a mini retro gaming box. My experience was less than thrilling, leading me to give up on the idea. So when the chance was offered to try another mini board with Mame, I have to admit I had some reservations. The X2 uses a micro HDMI port and a unusual .8mm power jack. Researching the specs, I ended up buying a Gemini joypad power supply and micro HDMI to HDMI adaptor from ebay. With all the parts needed to get the board working, I downloaded one of the Jellybean SDC card image files.

The X2 will only boot with a working OS installed on an SD card. Turn it on without one and the board will not post, sitting there, dumb to the world. To get the image on the memory card, you will need a computer with an SD card reader, so you can flash the image.

Ready to go SD cards can be purchased from com.odroid.com. If you did not get one when buying your X2 board, the following tutorial with guide you through preparing your own SD card.

1. First you will need an image file, found here “com.odroid.com/sigong/nf_file_board/nfile_board.php”

Choose the files appropriate to your board and follow the link to the image file.
2. When you have it downloaded, extract the file to your desktop. Insert your SD card in to your card reader and make a note of its drive letter, you will need it later.

3. Now download Win32DiskImager from “launchpad.net/win32-image-writer” and  extract the file and run the program as Administrator.

5. Select the driver letter of your SD card in the device box, make sure your select the correct drive letter or you may wipe your hard drive!

6. Click “Write” and wait for the process to complete. Once the DiskImager has finished, exit the utility and remove your SD card from the reader.

7. Insert the card in to the Odroid and power on. If everything went according to plan, the board should boot up.

Copying an image to the SD Card in Linux (graphical interface)

If you are using Ubuntu and hesitate to use the terminal, you can use the ImageWriter tool (nice graphical user interface) to write the .img file to the SD card.

Thankfully the hard days of finding a good emulator for Andoroid are behind us and now there are several to choose from. For the X2, I found MAME4droid and NeoDroid the pretty easy to set up and more importantly free to use. 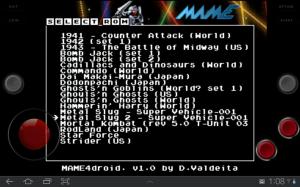 MAME4droid was by for the easiest app to get working and the performance on the Odroid was nothing but remarkable. Street Fighter 2 playback was a steady 60fps with only the occasional drop to 30-40fps when a lot was going on. Had i not had the FPS showing in the top corner, I don’t think I honestly would have noticed. The sound was also perfect, unlike the RPi which struggles to offer good sound support. The Odroid handled it with ease and really pulled the rug from under my RPi Mame efforts. This was especially true when I came to play Bubble Bobble, which the RPi almost died trying to play with appalling FPS and stuttering audio. On the Odroid the game was silky smooth, the only thing missing was a proper joystick. 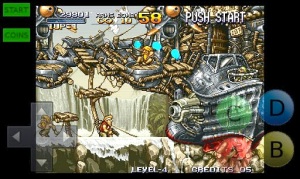 Not as easy to configure I found as MAME4droid, but from what i gather is one of the better free NeoGeo emulators out there, tho there is a paid version. One of the first hurdles I faced was actually running NeoGeo roms. The emulator seems almost allergic to some NeoGeo rom files and in other cases threw up errors regarding missing files names. Eventually I discovered what I believed to be the problem, the romset which comes with NEOdroid. Put simply, I think it is out of date and has one or two spelling errors such as when running Metal Slug, NEOdroid reports file 263-pg1.bin as missing. However a closer look of the Metal Slug archive revealed the existence of file 263-p1.bin but no 263-pg1.bin. This seems to be an on-going issue for many other online users as I found quite a number of threads on the subject. I also found a post by the author of NEOdroid, instructing users to use Mame roms with Neodroid and not NeoGeo roms. This has me a little confused, given that NEOdroid is meant to be a NeoGeo emulator. Okay I know the NeoGeo was basically an arcade unit in a console, but surely there are some differences between a real arcade cabinet and the console. I plan to try this app out a little more before writing it off, as it overall seems like a good emulator.

Eventually the Odroid will be installed in a Picade cabinet and connected to a proper joystick and hardware buttons. It will be interesting to see how well the android operating system handles the setup. So make sure you come back to see how i get on, making an android gaming cabinet.