Is Your Phone Acting Up? 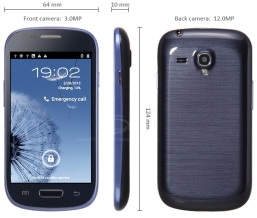 A week ago I wrote a review of the Alps / Star S9920, in which I highlighted some of the highs and lows of buying this popular S3 mini clone. Shortly after after writing the article I began receiving messages from fellow S9920 owners, who were also struggling with their devices. While I still don’t have a solution to all the problems that have been put to me (and I did look) there just isn’t that much documented on the S9920. This isn’t much of a surprise, when you think of the number of phones that come out of China. Unlike major brands such as Samsung, HTC or Apple, Alps constitute but a footnote in the Android device market.

In this article, I’ll try to address one of the main issues experienced by users of the S9920: ghost touching. It manifests itself in the form of icons randomly selecting themselves without the screen ever being touched. This fix may also help with some of the other problems associated with the digitizer / screen on the S9920.

Before we begin, I must stress that this is a very tricky fix and requires you have a steady hand for soldering. I would only recommend you attempt this fix after exhausting all other avenues. Make a mistake and you could very well damage your phone beyond repair. Know that you do this at your own risk, and I cannot be held responsible if you kill your phone. With the disclaimer out of the way, let us continue.

A month after receiving my phone, the tell tale signs that something wasn’t quite right, began to emerge. Sometimes I would pick up my phone and the screen would not register my finger swiping the screen, while on other occasions the phone would act as if it had been possessed, randomly opening apps, usually located at the bottom right of the screen, close to the back button. The only way I found to make it stop, was to place the phone on a flat surface and run a finger firmly across the screen, directly over where the back button icon is located.
A few minutes doing this and the phone usually would begin to act normally. However these bouts of the ‘crazies’ were becoming ever more frequent, making the phone very unreliable for daily use. After contacting Dracotek, the company I bought the phone from. I explained the problem I was having with the phone and their representative kindly offered to replace the faulty handset. This really is a Chinese company with good customer support, in fact the best I have encountered. Generous as the offer was, after reading all the articles I could about the S9920, I realised that a replacement would only delay the inevitable, as the S9920 clearly has an inherent flaw in regard to the touch screen. After making sure I had a back up phone, I decided to try out a suggestion I found online while reading up on the S9920. This involved carefully disassembling the phone, detaching the screen and removing the motherboard. Then, with a fine tip soldering iron, reflowing several points on the rear of the board. Without any photos to go on, this possible repair was really a shot in the dark, but I decided I to give it a go.

Things you will need:

To perform this fix you will require:

First make sure your phone is turned off, then remove the back cover and the battery, place them to one side. Next using a small Phillips screwdriver, remove the eight screws from the rear of the phone. The bottom right screw is covered with a white sticker. By breaking this you will void the warranty of your device, which means you won’t be able to return your phone, so be certain that you wish to continue.

With the screws removed, pick up the phone and examine the edge. You should see a series of small slots, this is where you will need your small flat headed screwdriver. Start by inserting it into these slots and gently prying the plastic apart.

The back and front of the phone should gradually come apart. With the back removed, carefully unclip the two connectors indicated in the photo.

These are for LCD screen and front facing camera. Before you go lifting out the motherboard, you will need to un-stick the power and volume buttons. First remove the plastic buttons that cover them. Underneath these are the switches, held in place with sticky back tape. Using a flat blade screwdriver, pry them away from the case. Remember be careful, replacement parts for the S9920 are scarce on the ground. Once you have them unstuck, lift the board up and away from the front case. You should now have the three parts of the phone laid out in front of you. 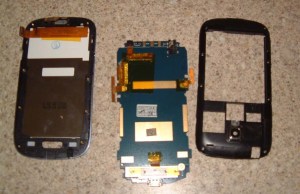 The black rear shell, logic board and front case, which includes the LCD screen (See picture). Don’t lose the plastic home button, located at the bottom of the front case. Turn the logic board over so it looks like it does in the picture above. Now gently remove the yellow tape covering the solder points. There should be one large square at the top of the board and a smaller one at the bottom for the hardware button.

A steady hand will be needed for the next part. Using a fine tipped soldering iron, heat up the contacts you uncovered from under the tape and ONLY those. Don’t spend too long with the iron on the board, you only need to warm up the solder enough for it to reflow. You should be able to see it happen. The solder will visibly change in appearance, becoming shiny. 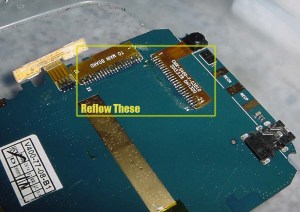 The contacts pictured above are very fine and tricky, take your time and try not to rush. Once you have done these, finish off by reflowing the contacts you uncovered on the bottom half of the board.

*Additional note: After I reflowed all the contacts, I took a Stanley knife and scored the board between the tracks, just to eliminate the chances of bridges between the lines. You can do this as well if you wish, simply use a sharp blade and run it down between the contacts your have reflowed. Make sure you do not score the brown ribbon cable, it is fragile and will not react well to sharp blades.

Before you reassemble the phone, take a look at the board containing the hardware buttons (see picture). On my S9920 this narrow board was not sitting level, which meant it was not aligned well with the front case.

This could easily have attributed to the problems I was having with the back button. The board is stuck down with double sided tape, but can be lifted off by sliding a something under it. Apply a little pressure with a flat bladed screw driver or Stanley knife, be careful as the board does flex and you do not want to snap it. Once it is unstuck, carefully reposition it and press it down, the tape will keep it in place. You can see how mine was slanted in the photo.

Well done! You have done the fix and hopefully your phone should behave a little better. Now you can carefully begin reassembling your phone. You can do this simply by reversing the process of taking it apart. Remember to be careful of the screen and camera cables as well as the volume and power buttons. Remember to place the home button back in the front case before you replace the motherboard.

So it has now been five days since I took my S9920 apart in a last ditched effort to get the phone performing properly, specifically the screen. I’m happy to report the repair seems to have worked! So if your screen is acting up as described above, this fix might and I must emphasis might! Restore your phone to normality. I was dubious as to whether reflowing the contacts have any effect, but it has. I can only conclude the traces on the board are simply not very good or perhaps scoring the board as I did, isolated the tracks and stopped any bridging that might have been occuring.

That’s all for now folks, keep on geeking!